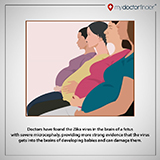 Last February 10, 2016, the New England Journal of Medicine reported the missing puzzle piece when it comes to the potential link of the Zika virus infection in pregnant women. Doctors have found the Zika virus in the brain of a fetus with severe microcephaly, providing more strong evidence that the virus gets into the brains of developing babies and can damage them. [1] The study involved a Brazilian pregnant woman that showed Zika-like symptoms. The team of doctors analyzed a developing fetus. The studies showed that there was a clear brain damage in the fetus and a full genome of the Zika virus was found in the developing fetus’ brain.

Meanwhile, this January, news regarding the Zika virus has spread worldwide. Even its increasing cases are alarming. The Zika virus disease is caused by a virus transmitted by Aedes mosquitos. It causes an influenza-like disease with concurrent conjunctivitis. This is the same mosquito that transmits dengue and chikungunya. Once bitten, the person will experience mild fever, rash, conjunctivitis, and muscle pain that normally last for 2 to 7 days. It is highly important to take precautions such as cleaning your surroundings to prevent places where mosquitos can breed. One must remember that mosquitos serve as the source of the infectious Zika virus.

In addition, due to the growing reports of microcephaly cases in other countries, health authorities internationally and locally are continually studying the potential link of the Zika virus in pregnant women and microcephaly. Microcephaly is the destruction of the cerebral structure of an infant that makes it significantly smaller than the heads of other children of the same age and sex. It reduces the infant’s brain development that eventually leads to seizures, developmental delay, intellectual disability, feeding problems, hearing loss, and vision problems. Microcephaly is not a common condition, but somehow in some parts of Latin America, its growing reported cases raised potential links with the Zika virus infection.

The 25-year-old Brazilian woman requested that the pregnancy be terminated when she noticed that the baby wasn’t moving and signs of microcephaly were present. The termination procedure was approved by national and hospital ethics committees. The team then did an extensive autopsy on the fetus and found the Zika virus in the brain – not just traces, but the entire genome of the virus. Also, the team claimed that the fetus had no evidence of any other infection that could have caused the damage and the mother did not have any of the known genetic causes of microcephaly. [2]

In addition, the Centers for Disease Control and Prevention (CDC) released a study about two newborns that died from microcephaly and two miscarriages in which evidence of the Zika virus were found in their brains and placentas.

The World Health Organization (WHO) declared the Zika virus as a global emergency and stated that until more evidences are verified, women who are pregnant or planning to become pregnant should take extra care to protect themselves from mosquito bites. Also, they still don’t recommend the imposition of any travel, trade, or screening restrictions related to Zika virus disease. However, it is advised that travelers going to and coming from countries with known Zika virus cases maintain a high level of vigilance and self-care.

Meanwhile, in the Philippines, the Department of Health (DOH) advises pregnant women who are experiencing symptoms of Zika virus disease should seek early consultation.