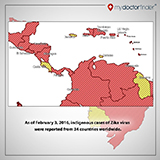 What is Zika virus?

The Zika virus disease is caused by a virus transmitted by Aedes mosquitos. This is the same mosquito that transmits dengue and chikungunya. Once bitten, the person will experience mild fever, rash, conjunctivitis, and muscle pain that normally last for 2 to 7 days. According to the World Health Organization (WHO), a Zika virus is an emerging mosquito-borne virus that was first identified in Uganda in 1947. The virus identified came from rhesus monkeys through a monitoring network of sylvatic yellow fever. In 1952, Zika virus was subsequently identified in humans in parts of Uganda and the United Republic of Tanzania.

As its number of cases increases, so as the following reports of the unusual cases of microcephaly among newborns in several Brazilian states. On November 24, 2015, health authorities of French Polynesia were alarmed by the increasing number of reported microcephaly cases. From an average of one per year, the numbers suddenly spiked to 17 reports in just a year. The World Health Organization (WHO) declared a global emergency over the spread of the Zika virus in Latin America and its suspected link to the surge of babies born with microcephaly. Microcephaly is the destruction of the cerebral structure of an infant that makes it significantly smaller than the heads of other children of the same age and sex.

Last February 2, 2016, the Department of Health (DOH) assured the public that the Philippines is still free from the continuous widespread of the Zika virus infection. In a press briefing, Health Secretary Janette Garin said the government remained vigilant against the disease since the mosquito carrying the virus was present in the country. [2] "Worldwide, the local transmission of the Zika virus within the last nine months had been confirmed in 28 countries, mostly in Latin America. The Philippines is not on this list. However, the vector Aedes aegypti mosquito—the same type of mosquito that spreads dengue, Chikungunya and yellow fever—is in the Philippines so we are very aggressive in our surveillance and information dissemination," Garin said. [3] Currently, there is no available medicine and vaccine to treat and prevent the Zika virus. However, the symptoms of Zika virus disease can be treated with common pain and fever medicines, rest, and plenty of water. If symptoms continue to occur after 2 days, consultation in the nearest health facility to seek medical advice is recommended. [4] The common symptoms of Zika virus are as follows: