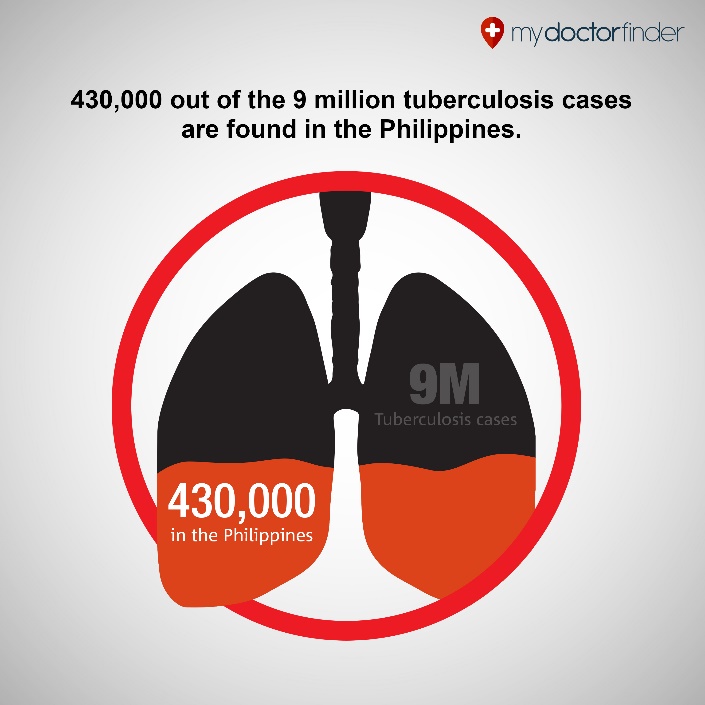 Based on the statistics of the reported cases of tuberculosis by World Health Organization (WHO), Philippines and 21 more other countries are placed as the “high burden” countries or where TB is most prevalent. There were an estimation of 9 million new cases of TB in 2013. 430,000 out of the 9 million TB cases are currently found in the Philippines. [1]

Tuberculosis is a bacterial disease usually caused by an organism called Mycobacterium Tuberculosis. [2] This disease usually affects the lungs, but it can also affect your entire system. Tuberculosis may be transmitted through the air from person A to person B via coughing, sneezing, speaking or even singing. The bacteria appears as droplets that will eventually travel to one's throat then directly to the main respiratory organ, the lungs.

There are still false speculations on how TB spreads. According to Centers for Disease Control and Prevention (CDC), tuberculosis won’t spread via shaking someone’s hand, sharing of things, sleeping on the same bed, and kissing. [3] But, everyone is still prone to this disease. Not everyone infected with TB bacteria recognizes the symptoms for some like the healthy ones has an immune system equipped with “walls” to avoid the bacteria. Some of the recognizable symptoms and signs of TB are: [4]

Once the symptoms persist, better go to your nearest Pulmonologists that may attend to your early tuberculosis concerns. There are two kinds of tests that can detect TB infection: the TB skin tests and the TB blood tests. The following tests must be given by a certified healthcare provider. You may find the list of Pulmonologists here: http://www.mydoctorfinder.com/nearestdoctor But, did you know that TB prevention is possible? With the TB vaccine called Bacillus Calmette-Guerin (BCG) vaccine and proper infection control, TB can be prevented. Always remember that prevention is better than cure!