Top 5 Most Common Diseases of Men 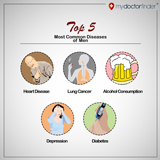 Men don’t really care much about their health as women do. They tend to downplay their symptoms and end up shrugging them off instead of seeking medical care which can cause their sickness to worsen or attract other ailments. Statistics say that men die at least five years earlier than women do mostly because of health neglect. [1]

Since the month of June is Men’s Health Awareness Month, the following health problems stated below are the five most common health problems men may encounter in their lifetime.

This is the most common disease that men have. Though also common in women, the number of males is doubled than that of the number of females. It comes in various forms which can lead to complications if left untreated or undetected. The American Health Association stated that more than one in three men are prone to have or currently is suffering from a cardiovascular disease. [2]

Gregory Burke, an MD, professor and chairman of the Department of Public Health Sciences at Wake Forest University School of Medicine, says that heart diseases begin to manifest 10 years earlier in men than in women. [3] Here are some of the risk factors that may eventually lead to heart disease:

Lung cancer is the top killer respiratory disease in both male and female. The expected number of cases for lung cancer in males for this year is 213,380 while 160,390 in total for the number of lung cancer deaths. Here are some of the risk factors that may eventually lead to lung cancer: [4]

According to the Centers for Disease Control and Prevention, the rate of alcohol-related hospitalizations and deaths are higher in men that in women. [5] Excessive drinking is associated in short-term risks in health and in safety. Compared to women, men are also more likely to do risky stuff like over speeding or driving without a seatbelt when drunk. Also, excessive drinking can increase one’s risk of developing colon cancer, cancer in the mouth, throat, esophagus, and liver cancer. [6] (source: http://www.cdc.gov/alcohol/fact-sheets/mens-health.htm)

Depression is an emotional disturbance that affects not only a person’s mood, but also their overall health. Both men and women can experience depression, but males experience it a little bit different compared to females. They tend to hide their feelings and are most likely feel tired and irritable, easily lose interest and have difficulty sleeping. Females are more likely to attempt suicide, but males are more likely to die by suicide. [7] Suicide is the eight leading cause of death among men, specifically in younger men. [8]

This disease is a silent health threat. It doesn’t show any symptoms at first. One’s blood sugar levels go up slowly over time which can cause complications if not diagnosed and treated early. Diabetes can cause problems in a person’s cardiovascular system and nervous system. And, it also causes erectile dysfunction and urological problems in men. [9]

[5, 6] Centers for Disease Control and Prevention. Excessive Alcohol Use and Risks to Men's Health. Retrieved from http://www.cdc.gov/alcohol/fact-sheets/mens-health.htm.