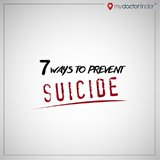 We Filipinos are known for our light and positive disposition in life no matter what catastrophe or tragic problems we've been through. We always manage to put up a smile on our faces for whatever happened; and that positive outlook made us popular all throughout the world.

Nevertheless, not all of us have that kind of mantra of smiling and staying positive when we're on our greatest downfall. Some may just end their lives, and some may attempt to do so - suicide.

World Health Organization (WHO) defines suicide as the act of deliberately killing oneself. According to a report of the WHO, someone is committing suicide every 40 seconds all over the world and over 800,000 people die due to suicide every year. In the Philippines in particular (Data from the National Statistics Office), the suicide rate from 1984 to 2005 went up from 0.46 to 7 of every 200,000 men; up from 0.24 to 2 for every 200,000 women. This increase may not be that noticeable but imagine the figures for the next years if we don't give emphasis on this matter.

Suicides are preventable with proper information dissemination and cooperation. There are a number of measures that can be taken at population, sub-population and individual levels to prevent suicide and suicide attempts. These include:

Lastly, what we needed to do the most is LISTEN. Listen to those who need companionship and someone to talk to because that could make a difference. Let them feel that they are not alone and they do belong.