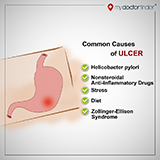 A peptic ulcer may occur suddenly without you even noticing the primary signs. Diagnosis and treatment for ulcer depends on the severity of one’s case. For the gastroenterologist to diagnose one’s stomach ulcer, she or he must review your medical history along with the cause of one’s ulcer, symptoms and any medications you are currently taking.

Several factors may cause your ulcer. Here are the most common factors that may contribute to your ulcer case:


A number of symptoms are associated with stomach ulcers. The severity of the ulcer will now be the basis of one’s diagnosis and treatment. But, how are stomach ulcers diagnosed? Self-diagnosing won’t do! You must go directly to a gastroenterologist and seek for his or her immediate medical assistance. A blood, stool, or breath test may be ordered. Other tests and procedures involve the use of medical tools such as the barium x-ray, endoscopy, and endoscopic biopsy. As what was mentioned above, the diagnosis and treatment for ulcer depends on the severity of one’s case.

Once the diagnosis has been done, your doctor will now suggest a treatment plan. You have the option between a surgical or nonsurgical treatment. It is important to promptly treat an ulcer. Most ulcer cases are treated with a prescription from your doctor, but in some cases, surgery is recommended.

If your ulcer case is because of the H. pylori bacteria, your doctor will be prescribing you some antibiotics and other medications such as:

Symptoms of a stomach ulcer may subside quickly once the treatment process has started. However, you must continue to take your doctor’s prescription to prevent the recurrence of your stomach ulcer. In some cases, surgery is required for the person to heal completely.

Once symptoms start to show, seek treatment as soon as possible. For the longer an ulcer remains untreated, the more likely you are to develop complications.

Sources:
“Stomach Ulcer” by Shannon Johnson of Healthline
“What is Peptic Ulcer Disease?” by WebMD