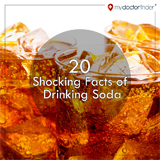 Sodas around the world are kind of the same all throughout, except for the fact that some flavors vary for each continent. Soda or soft drink as most people call it is one of the few drinks people love drinking especially after eating your favorite meal. Soda matches all the products being sold in fast food chains and you just can’t seem to resist buying one.

Just like the previous article about the 20 surprising benefits of drinking green tea, this post would basically focus on the several facts you may not know about drinking soda.

1. Weight gain – Whenever you drink soda, you gain visceral fat and it is the kind of fat that gathers around our vital organs – liver, kidneys, intestines and stomach. It is also in relation with gaining type 2 diabetes and other inflammatory diseases. The most obvious indication that you're gaining visceral fat is when you have a protruding belly.

2. Doesn’t make you feel full – The amount of sugar in a soda is estimated; 50% glucose and 50% fructose. If consumed without fiber, the brain cannot detect fructose, making the consumption of calories unregulated.

3. Affects aging – Drinking soda can actually make you look older. All the sodas – including the zeros and diet ones; contain phosphoric acid that gives the soda the tangy flavor and extends its shelf life by fending off the bacteria and mold.

4. Insulin resistance – The insulin resistance is the gateway to metabolic syndrome, which in fact can be described as a risk factor that is also associated with type 2 diabetes and heart disease as well.

6. Type 2 Diabetes – Just like on the previous numbers, soda can lead to insulin resistance, which usually progresses to metabolic syndrome.  A study in Harvard School of Public Health specifically relates sugary beverages to the development of type 2 diabetes. The said research showed that by drinking one to two sugary drinks a day increases the chance to acquire type 2 diabetes by 26 percent.

7. Alzheimer's Disease – Insulin resistance is actually highly related to gaining Alzheimer's disease that is also referred to as type 3 diabetes in the medical community. Hence, a Japanese study concluded that those with type 2 diabetes are more likely to develop Alzheimer’s or other forms of dementia.

9. Caramel coloring in sodas, a cancer-causing chemical – The brown or caramel coloring of sodas contains two contaminants that causes cancer in animals, the 2-methylimidazole and 4-methylimidazole. After some studies, Coca-Cola and Pepsi claimed that they have switched to a different coloring that doesn't include 4-methilimidazole.

10. Sodas can be addictive – Sugar in sodas triggers the release of the neurotransmitter hormone dopamine in the brain that makes the drinkers feel good. This shows how highly addictive cocaine works – which explains why sugar is hard to resist.

11. Bad for your teeth - The phosphoric acid which was motioned earlier actually interferes with calcium absorption and can also lead to osteoporosis. The said acid can lead to tooth decay, tooth rot, gum disease and cavities. A published study in the journal of General Dentistry states that the oral damage cause by soda consumption is just as worse, that those of the long term drug usage. According to Dr. Bassiouny, stated that the citric acid present in both regular and diet soda is known to cause tooth erosion.

13. Infertility – BPA or the epoxy resin bisphenol A is a synthetic estrogen that has been linked to diabetes, reproductive cancers and infertility. BPA serves as a barrier between the metal and the drink.

14. Genetically modified corn – Some sodas use high fructose corn syrup instead of cane sugar because it's cheaper than the usual. It's still not yet proven if genetically modified crops can cause negative side effects, but there have been some researches linking the consumption to infertility, tumor growth and damage in the digestive tract.

15. Pollute the water – We don't have the capability to breakdown the artificial sweeteners contained in all diet sodas. A soda just doesn’t harm us, but also our environment. When we release the sweeteners that our body digested, they flow into the waterways, polluting the lakes and rivers.

17. Obesity – In addition, soda's connection to the obesity epidemic is interconnected. Harvard researchers have calculated that each additional soda consumed by someone actually increases their risk of obesity 1.6 times.

18. Dehydration – The typical ingredients of a soda contains high sugar, sodium and caffeine. Those three mentioned, actually makes our body dehydrated over a long period of time and can cause chronic dehydration.

19. Amount of caffeine – On the previous number, it was mentioned that sodas contain caffeine. It was proven that there has been correlated to some complications like cancer breast lumps, irregular heart beat and high blood pressure.

20. No nutritional benefit – This is the only reason you needed to keep in mind. Sodas doesn't help in providing what our body needs.

Hoping these reasons would help you stop yourself from drinking sodas. It’s better to drink any other healthier and safer alternative, than to risk yourself with a short while contentment effect.