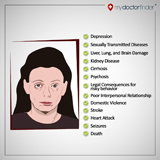 Methamphetamines or popularly called as “shabu” in the Philippines is also known as meth, crystal meth or crank. It is an addictive stimulant that can be used in different ways like smoked, eaten, injected or snorted. Because of the psychoactive properties that methamphetamine contains, it actually gives the user false confidence and sense of happiness. If used continuously, the user may develop a sense of continuity using the said stimulant. Methamphetamines are now considered to be the world’s most abused drug.

Some users were so into using the stimulant that it leaves them wanting for more. As obvious as it can be, methamphetamine can destroy the life of the person taking it, by destroying the body's resources that eventually will result to pain which can only be relieved by using more of the drug.

Moreover, methamphetamine is a child of a drug class called amphetamines, and it both provide users with increased energy, intense desire to chat, and sustained high that leads to a higher risk of a damaged central nervous system.

Listed below are some of the effects that the users will experience after a long run of methamphetamine usage.

Seek help from professionals, councilors, family, or to the person you’re comfortable sharing your problems with. The usage of any drug or stimulant won’t solve any of the problems you are currently facing. Are you willing to risk your life just for the sake of trying or continuing taking meth or any drug? Think about it.